Techarticles.Me – Christmas is a time of joy, meeting with relatives, family atmosphere. But don’t cheat yourself gifts also play a big role in it. Is nothing exaggerated about the commercialization of Christmas. The longer, electronics fell to Christmas tree – smartphones, tablets, as well as intelligent speakers. And the latter, someone has recently started getting a lot – though not very honest.

Applications in the App Store are not as secure as some people. Many popular applications have stolen user data and even sent to a server in China. However, it was done in secret to the user. New applications are thought to aid in the configuration of the Amazon speakers Echo, do it a little more directly. 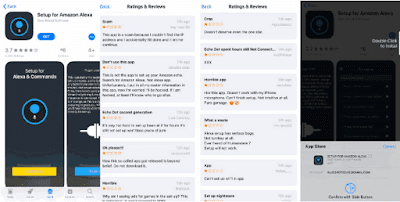 The settings for the Amazon Alexa after installation to tell us to enter an IP address, device serial number and the name. In the App Stor, the application gathers a lot of negative reviews, many of the threads in it also appeared on Reddit. However, neither Apple nor Amazon has yet to take any step in this regard, and the app was in the 60 ‘s the best applications and 6th in the Tools tab.

Maybe in our country, there are not many who are worried, but we warn you – if any of You, or buy Amazon speakers Echo and use iOS – let it be considered for this application.

WhatsApp will stop working on this device in 2020

Ad Blockers will stop working in Chrome in early February 2020