List of upcoming smartphones with Snapdragon 845 in 2018 – It’s no secret that nearly all the top smartphones in 2018 will be powered by Qualcomm’s Snapdragon processor 845. The network has leaked a list of devices that will push the chip mentioned above, and in addition, we know the month in which the device will enter the market.

See the following list, we can clearly see that in the coming year, we will have a very similar power distribution in the mobile market as on the device with the Snapdragon 835. 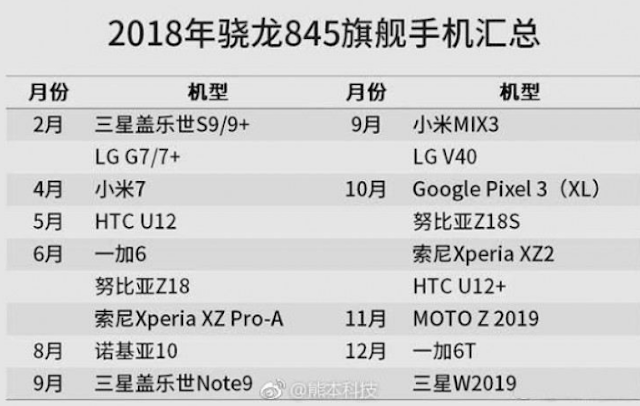 Already in February will bring Samsung Galaxy S9 and S9 +, which will be equipped with Qualcomm’s system in some markets (in the others will go with version Exynos 9810). In the same month LG will present models of the G7. We have to wait for the next premiere until April, then we’ll meet Xiaomi Mi 7, HTC will debut a month later U12. June will be month launch OnePlus 6, ZTE Nubia Z18 and Sony Xperia Pro XZ-A.

The other new thing from Samsung or Galaxy Note 9 will appear in September, in addition to Xiaomi Mi Mix 3 and LG V40. October will belong to Google, then we will know the smartphone and 3 Pixels Pixels 3 XL but their market debut will also have Nubia Z18S, Xperia and HTC XZ2 U12 +. This is not the end of the premiere, Moto Z will debut in November (2019), and in December the OnePlus will release model 6T. In the same month we will get to know other new Samsung, and more specifically the smartphone with the flap marked with W2019, the successor of W2018.