Techarticles.me –  Samsung confirm February 20 will be presenting smartphones foldable from a series Galaxy. On 20 February this year will be held specialized conferences Galaxy Unpacked, where new devices of the series the Galaxy will be presented.

So far, it has been speculated whether the people of Korea during the event will present exclusively family of smartphones Galaxy S10, or perhaps the premiere of a completely new device will take place. The latest footage published on Twitter explicitly answer this question. Prototype smartphone folded was officially presented in November last year on a Samsung Developer Conference (SDC) 2018 in San Francisco. Then we learned that the equipment will enter the market in the year 2019. However, it is unclear whether manufacturers will be “fine n” in the first quarter. 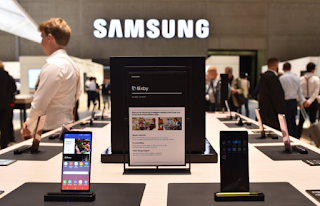 Video footage shows a short motif is pliable, which clearly shows the premiere of the device in question. We still do not know what will be the final, and according to rumors it could reach $1,500. Not much is known about the appearance of the smartphone as on presentation of Samsung in November, cleverly hiding the prototype in special housing.

Smartphones are folded may have 2 screens, traditional look outside, and the flexible panel in it.